The Walker graves: Final resting place for one of Brimstone’s early leading couples

BRIMSTONE — On the end of a small ridge overlooking Indian Fork Creek is a small cemetery — consisting of just three graves — that is quickly being forgotten and in danger of being lost in new growth.

This is called the Walker Cemetery, not to be confused with the larger Walker Cemetery that is located further up Indian Fork Creek. Its graves may be small in number, but the cemetery is the final resting place for a husband and wife who put down deep roots in this rich farming valley off Brimstone Creek, and whose descendants still play a vital role in Scott County today.

Not too long ago, when long-time 2nd District County Commissioner Lawrence Walker still made cowbells on the family farm along the creek, a drive through Indian Fork was one of the most beautiful in Scott County. The fields were neatly kept, sheep grazed in the pasture, and the Scott County Road Department even tarred and chipped the road up the creek, even though it only led to one house.

Sadly, those days have become a part of the fading past. The road that leads up Indian Fork Creek and then up the ridge and back towards Robbins is still a county road, but it is not maintained. Once you pass the old Walker home on the creek, and until you get to the intersection of Wolf Creek Road and Ridge Road nearly three miles up the ridge, the road is little more than an ATV trail. In fact, the signs nailed to the trees denote it as Brimstone Recreation’s Trail 99, and the stretch of road along the creek is best suited for 4×4 vehicles. The fields — at least those beyond the Walker home — can hardly be called “fields” anymore; they’re quickly being reforested. The only power lines are holdovers from the coal mining days along Indian Fork Creek, and they’re mostly laying on the ground, becoming lost in the undergrowth.

A portion of the Walker farm — once the most prominent along Brimstone Creek — is owned by Leon Walker. Another 200 acres are owned by Mark and Rita Cooper. And still another part of it is owned by Lyme Timberlands, which leases recreational uses of its property to Brimstone.

But among Lyme Timber’s nearly 10,000 acres along Indian Fork Creek and the surrounding mountainsides is a tiny, two-acre plot containing the graves of Daniel and Almira Walker.

The Walkers’ graves, along with their daughter, Minnie Hughett, are protected by a modern, chain-link fence. The nature of the one-lane road that loops around this small cemetery, and the fact that the entirety of the two acres inside the loop was at least partially cleared, suggests that the original intention was for this small plot to grow into a large family cemetery. But only one of Daniel and Almira’s 14 children were buried with them, and the three graves stand alone, more than 100 years later.

Get headlines delivered directly to your inbox with the Inside Scott Newsletter.

Today, there is no one maintaining the tiny Walker Cemetery. The once-cleared area outside the fence is being reclaimed by nature; hundreds of small pines have sprouted. The road is muddy and potted. Trees that fall into it are left to lay.

It’s possible to reach the Walker Cemetery from Ridge Road by way of a two-wheel-drive vehicle — but just barely. Even though it’s a county road, you wouldn’t want to drive your family sedan over it. From the lower side, by way of Indian Fork Road (also called Walker Road), a 4×4 is needed. This is a trip better suited for an ATV outing through the foothills of the Cumberland Mountains.

But the headstones at Walker Cemetery remain to tell the story of one of Brimstone’s early families.

Who was Daniel Walker? 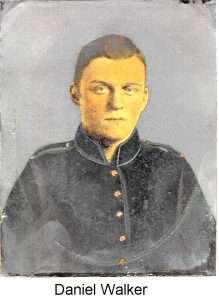 Daniel Walker was born in North Carolina in 1844. His father, Samuel Walker (1818-1907) migrated to Tennessee with his family when Dan was just a boy, moving first to Cocke County and then to newly-formed Scott County and settling on Indian Fork Creek.

While Daniel Walker was the oldest son of Samuel and Mary Ann Elizabeth Hutson (1818-1910), there were four children in the family by the time they arrived at Brimstone in early 1857. Mary Ann would have been pregnant at the time; their fifth child, Joseph Samuel, was born in April 1857, and his place of birth was listed as Indian Fork Creek.

As a young man, Dan Walker volunteered for the U.S. Army during the Civil War. He was captured at Cumberland Gap in 1864 and spent 10 months in captivity, the last of it at Bell Isle along the James River in Virginia, before being pardoned by the Confederacy. He was honorably discharged from the Army in early 1865.

Who was Almira Goad?

While the Walker family was still brand new to Brimstone Creek, the Goad family was well-established as one of the community’s most prominent families.

Almira was the daughter of Joshua and Elizabeth Robbins Goad. Her father owned a large amount of land along Brimstone Creek, and Almira was one of 10 children. Her brother, John, was Scott County sheriff at one point, though he considered resigning the position after he was forced to hang a man who had murdered a school teacher. He later served as circuit court clerk and county trustee. Almira’s sister, Etta Tennessee Goad, married Scott County Superintendent of Schools William F. Lee. She died when she was just 23, but she was the grandmother of U.S. Congressman and Knoxville Mayor John J. Duncan, and the great-grandmother of Congressman Jimmy Duncan.

Deeper into the Walker family

The Walker family had a proud lineage when they arrived at Indian Fork. They had deep Irish roots. Dan Walker’s seventh great-grandfather, Thomas Walker, was from Nottinghamshire, England (even those who know very little about England have heard of Nottingham and the Sherwood Forest). But he moved to Ireland, and the next several generations of Walkers lived in Ireland.

The Walkers continued to live in Ireland until John Walker — Daniel Walker’s great-great-grandfather — migrated to the United States. His ship sailed into Philadelphia in 1720 and he settled in Delaware. Later, his son — Col. John Walker — moved to North Carolina.

Col. Walker served under Col. George Washington in the British army and later fought the Cherokee Indians. Still later, he served in the Revolutionary War, as did all of his sons, including Thomas William Walker, Daniel Walker’s grandfather.

After the war, Thomas Walker married Elizabeth Hoffman in North Carolina. The Hoffman clan had deep roots in Germany, and were among that nation’s wealthiest families for generations with holdings in the gold-mining industry. But Has Georg Hoffman — Daniel Walker’s third great-grandfather — lost all of his holdings in the Bohemia gold mines after converting to a Protestant, and he left Germany to seek a fresh start in America.

Thomas’s son, Samuel, was an Indian fighter and helped round up the Cherokees in East Tennessee and move them into a fort along the Hiwassee River. He and his wife, Mary Ann, are both buried at the other Walker Cemetery, further south along Indian Fork Creek.

Daniel Walker was Samuel and Mary Ann’s oldest son. He and Almira, married on March 12, 1866, had 14 children, including a set of twins, though not all of them survived to adulthood.

Two of Daniel and Almira’s children, Flora and Vicy, died at a young age — Flora at 17 months; Vicy at 11 months — and are buried alongside their aunt, Etta Tennessee Goad Lee — in the forgotten hillside cemetery a short distance from the Walker farm.

Among the Walkers’ children who did survive to adulthood was Thomas Nelson Walker (1877-1954). He married Zida Kline, the aunt of Dr. George Kline. Among their children was Lawrence Walker, who served as county commissioner for 32 years and was noted for his craftsmanship — particularly making hand-crafted cowbells. He died in 2013. Another of their children, James Walker, was principal at Robbins School for 15 years before retiring in the 1980s.

Old graves like these are worth visiting. They may not inspire photographs or paintings like the scenic overlooks, waterfalls and craggy rock formations that dot this area’s landscape, but they tell the story of who we are — as a people and as a community — and shouldn’t be forgotten.

A Huntsville man is facing a laundry list of charges in Oneida following what began as a routine traffic stop on Alberta Street on...
Read more
Local News

A Helenwood man was arrested Friday afternoon, after his go-kart crashed into the doors of an Oneida bank. Daniel Lloyd, 39, of Helenwood, was arrested...
Read more
Education

Seven from Scott County graduate from University of the Cumberlands

WILLIAMSBURG, Ky. — Seven people from Scott County were among the graduates from 40 states and multiple foreign countries who graduated from University o the...
Read more
Outdoors

Oral tradition has it that one day Jacob Blevins was walking with his wife, Catharine (Catie), when he suddenly stopped and stuck a stick...
Read more
Features

There was a time in Southern Appalachia when Decoration Day was one of the most important days of the year. Families and entire communities...
Read more
Features

Forgotten Times: The rise of the Tibbals flooring mill

In 1946, shortly after the close of World War II and as the post-war housing market boomed, one of the most impactful events of...
Read more
Features

On Thursday, April 8, 2021, a tornado touched down in Norma and Straight Fork, damaging numerous homes and leaving hundreds without power. The tornado...
Read more
Features

It's not everyday that a two-vs.-three game ends prematurely in a run-rule decision, but that was the case at Bear Creek Saturday afternoon, as...
Read more

Out-of-work Tennesseans who are milking the unemployment insurance system may soon find their benefits cut off, and even be asked to repay the funds...
Read more

A Huntsville man is facing a laundry list of charges in Oneida following what began as a routine traffic stop on Alberta Street on...
Read more

A Helenwood man was arrested Friday afternoon, after his go-kart crashed into the doors of an Oneida bank. Daniel Lloyd, 39, of Helenwood, was arrested...
Read more

Seven from Scott County graduate from University of the Cumberlands

WILLIAMSBURG, Ky. — Seven people from Scott County were among the graduates from 40 states and multiple foreign countries who graduated from University o the...
Read more