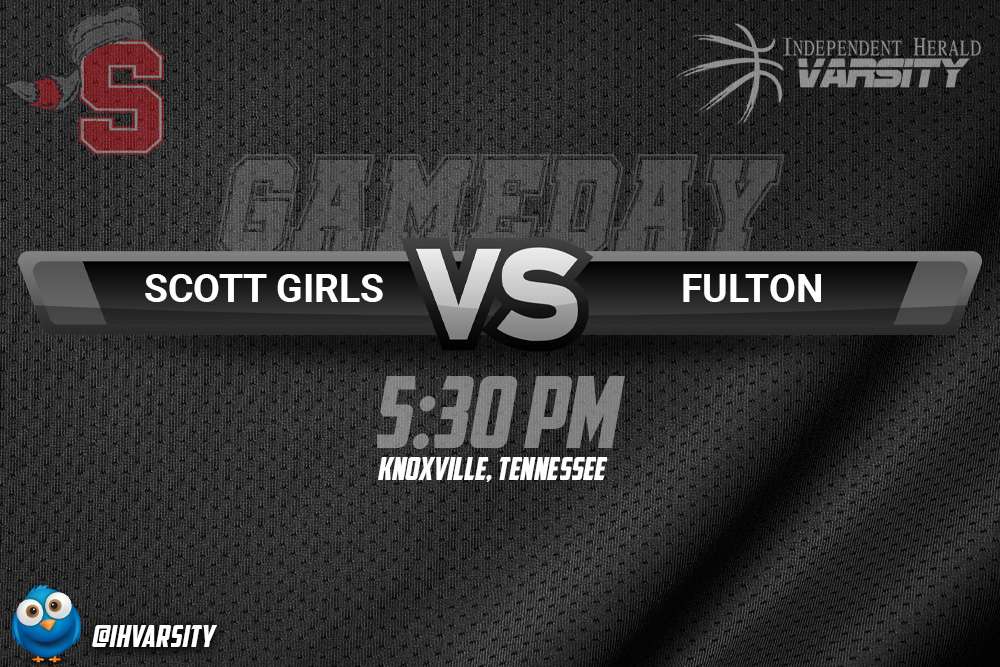 First up, in terms of start time, will be Scott High’s Lady Highlanders at Fulton. It’s a No. 3 vs. No. 2 game, with two of the biggest stories in District 4-AA looking to advance to the championship game.

Scott High enters tonight’s game with an overall record of 6-14, but with their highest regular season district finish in 25 years, and their most district wins in a decade. Fulton enters with a record of 16-6, and has been the most improved team in District 4-AA this season, thanks in no small part to the play of standout freshman Sammy Taylor.

On paper, Fulton is a much better team than the Lady Highlanders, and not just because of the two teams’ records. The last time they played, one week ago, the Falcons very much hung with an outstanding Oak Ridge team before eventually losing by 11. They defeated South Doyle — a team Scott High lost to last time out — by 15. They’ve defeated Kingston by 22 and 17; the Lady Highlanders split with Kingston, winning a tight one at home and losing by 20 on the road.

There’s more, but that’s the basic gist. So, is it a done deal that Fulton advances? Maybe not. The Lady Highlanders have certainly not been run out of the gym either time they’ve faced the Falcons this season, and are entering Friday’s game feeling like they’re capable of an upset.

The first time the two teams played, at Scott High back on Jan. 15, the Lady Highlanders eventually lost the game by 10, but were very much in it through the first three quarters. The second time they played, at Fulton on a Saturday morning two weeks ago, the Falcons controlled the game start to finish and won by 14. But if not for three early 3-pointers, the game might have been different.

Fulton plays a very aggressive brand of defense that makes life difficult for its opponents, but it also exposes the Falcons to potential foul troubles. If Scott can exploit that with an offensive aggressiveness of its own, and if the Lady Highlanders can rebound the basketball better than they did the last time, they should give themselves an opportunity to win the game in the fourth quarter.

Get headlines delivered directly to your inbox with the Inside Scott Newsletter.

Ultimately, of course, the game is going to come down to whether Scott’s shots fall. The Lady Highlanders will need big games from their senior guards, Julia Butts and Callie Carson.

With a win tonight, Scott High will host a region quarterfinal game next week and will play in the district championship game on Tuesday, likely at Alcoa. With a loss tonight, the Lady Highlanders will play in the consolation game on Monday, likely hosting Kingston, and will be on the road for the region quarterfinals, probably at either Northview Academy or Gatlinburg-Pittman. 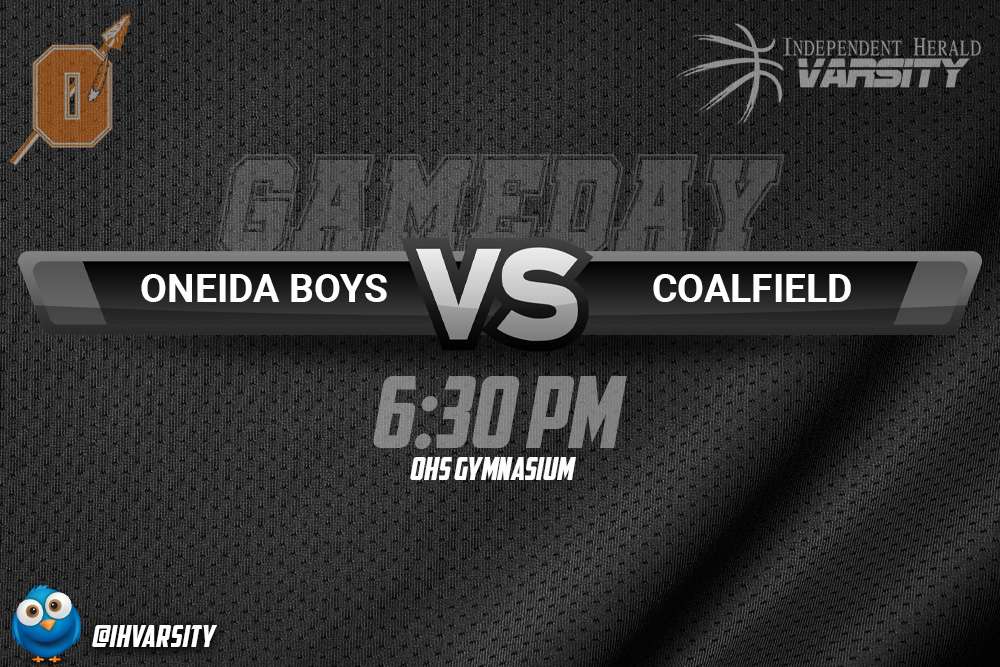 As the Scott-Fulton game is nearing its end, Oneida and Coalfield will be tipping off at OHS Gymnasium, with the loser’s season coming to an end.

This game represents a flip-flop for these two teams. Back in 2018, Jacob King’s first year as the Indians’ head coach, Oneida ended its season at Coalfield in a first round district tournament game, losing by 20. It marked the third time in four years that the Indians had traveled to Coalfield for an elimination game in the district tournament, and they lost all of them.

This year, it’s Oneida that is hosting an elimination game as a heavy favorite, and Coalfield that is doing the traveling, for a second straight year. The Indians enter with a record of 17-4, while the Yellow Jackets are 4-21. One of those wins for Coalfield came on Wednesday, when the Yellow Jackets outlasted Oakdale for a 62-61 win in the District 4-AA play-in game, keeping their season alive.

Their records suggest that this game should be a cakewalk for the Indians. But Oneida has not often blown teams out, at least in the second half of the season; several of the Indians’ recent games have come with an “upset alert” tag, at least in the first half.

The first time the teams played, back on Dec. 4, Oneida put 100 points on the board and won by 37. It was easily the most points given up by Coalfield this season. But the second time was much closer; in a road game on Jan. 19, the Indians won by 14 points, 77-63.

Thursday’s district tournament opener between the Lady Indians and Oakdale proved that you can never pen teams in before the game is played. Oneida won — but barely. After winning each of its regular season district games by an average of 29 points and letting no team stay within single digits, the Lady Indians defeated Oakdale by just five.

So, as they say, there’s a reason that you play the game on the court instead of on paper. But the Indians clearly have the advantage in this game, and their superb backcourt of Nathan Bowling, Kolby Morgan and Jeric Huling should be able to drive the Indians to a fairly comfortable win as long as the team isn’t over-looking Coalfield. 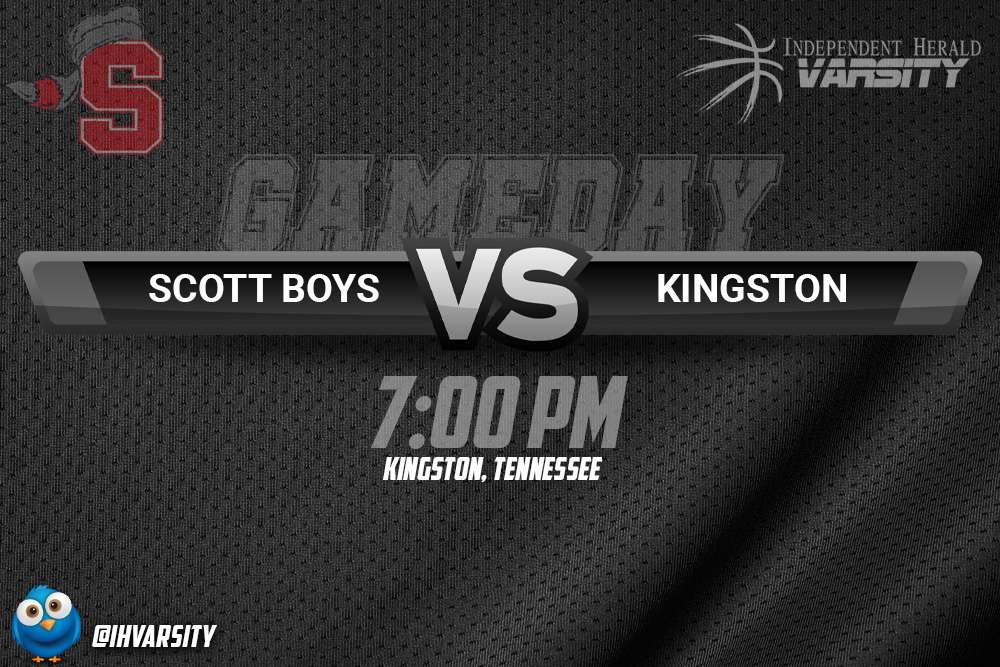 When Kingston defeated Alcoa back on Feb. 2 to move into the driver’s seat in District 4-AA, you couldn’t help but feel that was in Scott High’s best interest.

It seemed a little strange to think that; the Highlanders had just beaten Alcoa themselves, and had lost to Kingston both times they faced the Yellow Jackets this season. But aside from Austin-East, Kingston seemed like a better match-up for Scott High than anyone else in the district. The thinking was that if Scott could get by a dangerous A-E team in the first round, facing Kingston in the semifinals would present a good opportunity to get to the championship game.

So here we are. Scott High took care of its business against the Roadrunners last night, winning 56-44, and will travel to Kingston tonight. The Highlanders would certainly like to have this game at home, or at least on a neutral court, but they played reasonably well the last time they were in Roane County, back on Jan. 9.

On paper, Kingston is easily the better team. The Yellow Jackets enter with a record of 20-5. They’ve won seven in a row, and have recorded some really nice wins, defeating Austin-East by 20 and Alcoa by 28 during that span. They also put up 92 points on a Loudon team that won the District 5-AA regular season championship.  They’re coming off a 17-point win over Sequoyah on Monday.

But Scott High is no slouch on its own. The Highlanders enter with a record of 15-8. They had chances to beat Kingston both times they played them. Both came down to a final 3-point attempt. In the first game, at Kingston on Jan. 9, the Highlanders probably should’ve won the game. But they let Kingston force a tie, and then the Yellow Jackets were bailed out on a controversial call with 1.8 seconds left that allowed them to win it at the line. The second time, Scott had the lead until the fourth quarter, and Kingston eventually won by three.

Scott High is playing better basketball now than it was in either of its prior two meetings with Huntsville. During that span, the Highlanders lost 8 of 11 games. Since they righted the ship, they have won eight in a row, and they’re playing their best basketball of the season. That’s due in no small part to a couple of seniors, Cash Tucker and Trevor McCarty, who are playing the best basketball of their careers, and the defensive aggressiveness and never-slow-down mentality of junior Dalton Prewitt.

A winter-like blast of cold air is headed our way for the middle of this week, bringing with it the threat for frost and...
Read more
Oneida

HUNTSVILLE — Oneida won its fourth, fifth and sixth games of the week at the Highlander Cup on Saturday, going three of three in...
Read more
Scott

HUNTSVILLE — Scott High started the day with dominating wins over Clinton and Harriman, and ended it with a loss to Oneida in the...
Read more
Eye to the Sky

Eye to the Sky: The dreaded S-word returns to the forecast?!?

Okay, let's end the suspense. The answer to the question posed in the headline is, "no." Snow isn't in the forecast. But it might wind...
Read more

HUNTSVILLE — Oneida won its fourth, fifth and sixth games of the week at the Highlander Cup on Saturday, going three of three in...
Read more
Scott

HUNTSVILLE — Scott High started the day with dominating wins over Clinton and Harriman, and ended it with a loss to Oneida in the...
Read more
Scott

HUNTSVILLE — Scott High's 0-9 start seems like a distant memory now. For the third time in eight days, the Highlanders were victorious on Friday...
Read more
Oneida

Eye to the Sky: The dreaded S-word returns to the forecast?!?

Okay, let's end the suspense. The answer to the question posed in the headline is, "no." Snow isn't in the forecast. But it might wind...
Read more

Scott County this week surpassed 11,000 "shots in arms," as a growing number of Scott Countians are being inoculated against Covid-19. The TN Dept. of...
Read more

A winter-like blast of cold air is headed our way for the middle of this week, bringing with it the threat for frost and...
Read more

HUNTSVILLE — Scott High started the day with dominating wins over Clinton and Harriman, and ended it with a loss to Oneida in the...
Read more