Features Our Back Yard Terry Cemetery: Final resting place of many from No Business
FeaturesOur Back Yard

Terry Cemetery: Final resting place of many from No Business

Our Back Yard is presented by First National Bank on the first week of each month as part of the Independent Herald’s Back Page Features series.

In the early days of the No Business settlement west of the Big South Fork River, the community’s dead were buried in the Nancy Smith Cemetery along No Business Creek, near the west end of the settlement.

But that changed in the early 1900s, when a landslide unearthed several of the graves. As a result, a new burial ground — Terry Cemetery — was established at a much higher elevation, on the flat ridge top atop the Cumberland Plateau to the south.

Today, a popular hiking and equestrian trail passes within a stone’s throw of the original cemetery in the No Business Creek valley, but you won’t see it unless you know what you’re looking for and where to look for it. However, Terry Cemetery is very much visible and accessible. It is located at the end of Terry Cemetery Road, which is as far as you can take a vehicle. The Terry Cemetery Trailhead is a popular starting point for hikers who are venturing into No Business and serves as an access point for the John Muir Trail.

The original cemetery at No Business was named for Nancy Smith, who died in 1861. But the first burial there was likely Richard Harve Slaven, the Revolutionary War veteran who is believed to be the first permanent white settler in what we now know as the Big South Fork National River & Recreation Area. Slaven — who settled along No Business Creek around 1815 and had as many as 13 children — died in 1840. There’s a small stone in the old cemetery with the initials “R.S.” carved into it, which is believed to mark his grave.

According to the National Park Service, the Nancy Smith Cemetery — which is sometimes referred to as the Smith-Slaven Cemetery — ceased to be used in 1911, when the mud slide occurred.

The first person buried in the Terry Cemetery was Myrtle Slaven, the infant daughter of Benjamin Slaven and Ethel Burk Slaven. Her grandfather, Charley Slaven, would later be buried in the cemetery when he died 11 years later.

Baby Myrtle was the great-great-granddaughter of Richard Harve Slaven, the first white settler of No Business and the first person buried at the Nancy Smith Cemetery in the valley. (Her father was Ben Slaven, her grandfather was Charley Slaven, and her great-grandfather was Elisha Slaven.)

In fact, many — if not most — of the people who lived in the No Business settlement were descended from Richard Harve Slaven. He was the first resident of the community and his great-grandson, Dewey Slaven, was the last. When Dewey Slaven died in 1960, No Business was abandoned.

But No Business was very much a thriving place in 1923, when baby Myrtle died and the new Terry Cemetery was started on the ridge above the settlement. There was a school, grist mills, multiple general stores, a boarding house and the community even had its own baseball team. It would be about a decade, at that point, before the Jerome Boyatt saga forever changed No Business.

Boyatt was the son of Ransom Boyatt and the grandson of Jordan Boyatt, who moved from Foster Crossroads west of Oneida to the head of No Business Creek and started a family farm in the late 1800s. In 1933, Jerome Boyatt shot and killed Pickett County Sheriff George Winningham and Winningham’s lawman son during an altercation at a Stearns company camp at nearby Rock Creek. The Boyatt family was herded to Byrdstown for questioning, with Ranse Boyatt later being released to tend to the farm. He was found hanged some time later, prompting his son to turn himself in to Scott County authorities. Jerome Boyatt was later kidnapped from the county jail in Huntsville by a band of vigilantes, tortured and shot to death along Hwy. 27 in Helenwood.

The second person to be buried in Terry Cemetery was Nancy Jane Smith, the wife of William Isaac Smith, who died in childbirth in 1925, at the age of 41.

Many others were buried at Terry Cemetery soon after. In 1927, Ben and Ethel Slaven — the parents of baby Myrtle — lost another infant child. Wendle Slaven was born and died on Aug. 29, 1927, and was buried alongside his sister. Just a few months later, Ben and Ethel were expecting again. But, again, tragedy struck. Archie Slaven was born and died in September 1928. He, too, was buried in the Terry Cemetery alongside his baby brother and sister. (Among the tragedies, Ben and Ethel had a baby girl, Letha Mae, who survived to adulthood and lived a long, fruitful life. She died in 2017 and is buried in Possum Rock Cemetery.)

Also in 1927, Nimrod Slaven died and was buried at Terry Cemetery. He was a grandson of Richard Harve Slaven, the son of Elisha Slaven and the great-uncle of babies Myrtle, Wendle and Archie. Nimrod Slaven owned one of the two general stores at No Business. His store was located about two miles west of the BSF River.

Speaking of storekeepers, Francis Marion Miller was buried in the Terry Cemetery when he died in November 1932, at the age of 30. He was the grandson of Francis Marion Miller Sr., who owned the community’s first store. France Miller moved the store to his place about half a mile up the creek from the river when the store’s original owner, Lewis Burke, died in 1909. John Miller — France’s son, and Marion’s father — helped operate the store, which was also the home of the Elva post office for several years. (The post office was later moved to Ike King’s store at Station Camp Creek.) France Miller also operated a mill along the creek.

Francis Wilborn Blevins, France Miller’s toddler grandson who was named after him, was buried at Terry Cemetery when he died in 1925 at the age of 17 months. Baby Francis was the 10th child of France’s daughter, Mary Ann, and her husband, Crawford “Craft” Blevins. He and their infant granddaughter, Edna Rose Blevins, both fell ill with the flux — dysentery. Edna Rose survived and recovered, but Francis Wilborn did not.

Francis Wilborn’s older sister — another of France Miller’s grandchildren — is also buried at the cemetery. Temple Blevins Kidd died three days before Christmas in 1937, at the age of 23, from complications of childbirth.

In 1946, Minnie Maudie Nelson Roysdon was buried at Terry Cemetery. She is the namesake of Maude’s Crack, the natural passageway through the cliff line that leads from the end of the ridge east of Terry Cemetery into No Business valley. Some say that Maude Roysdon discovered the passageway as a shortcut to deliver lunch to her husband, Rev. Isham R. Roysdon — who died in 1935 and is also buried in the cemetery — as he worked in a logging operation. Others say that Maude and Isham used the passageway to reach their temporary home in a rock shelter at the base of the cliff after their house burned.

And, in 1960, when Dewey Slaven — the great-grandson of Richard Harve Slaven — died at the age of 75, he, too, was buried at Terry Cemetery.

Dewey Slaven’s death marked the end of an era. Long after everyone else had left No Business, Dewey Slaven had remained. It was out of respect for him that the Scott County Court left a voting precinct in No Business so that he could cast ballots during the elections. But when he died, the precinct closed, and so too did the chapter of human settlement in No Business.

Richard Harve Slaven had ventured into the No Business valley in 1815 and became the valley’s first settler. He was buried on a hill overlooking the creek, a cemetery that was forced to be abandoned and a new one established atop the ridge following the mud slide of 1911. And it was there, in the “new” cemetery, that his great-grandson and the final settler of No Business Creek was buried in 1960. Things had come full circle. 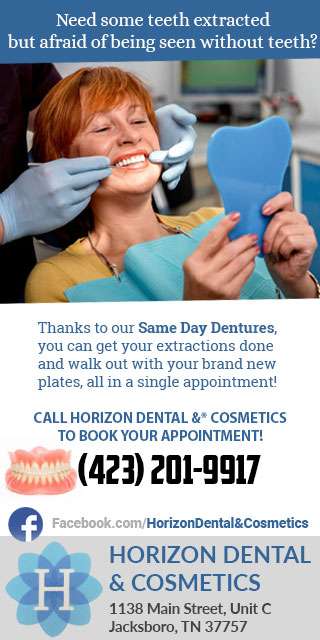 Related news
Our Back Yard

Old mountain cemetery got its start with Revolutionary War veteran

Editor’s Note — In recent months, “Our Back Yard” has featured several of the cemeteries located on Scott County’s recreational lands, including the two...
Read more
Features

Located far up Indian Fork Creek, near the base of Griffith Mountain, the Walker Cemetery is almost three miles from what is today the...
Read more
- Advertisement -