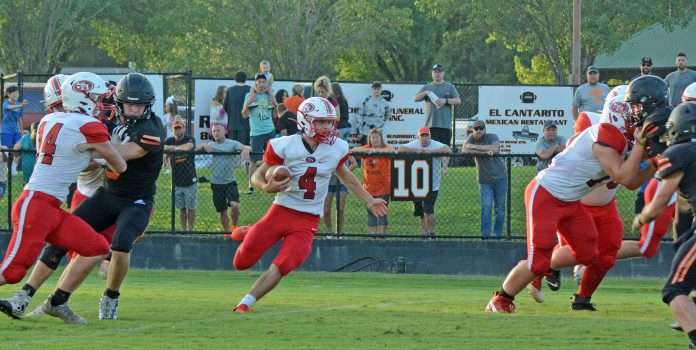 COALFIELD — Three turnovers and a tough Coalfield defense were too much for Scott High to overcome here Friday, as the Highlanders were defeated 35-7 by the Yellow Jackets in their season opener.

Scott was limited to 150 yards of offense and turned the ball over three times before finally finding the end zone late in the fourth quarter of Friday’s game. Coalfield, which advanced to the state semifinals a year ago and was ranked as the state’s No. 5 team in Class A heading into Friday’s game, proved to be stingy on defense, keeping the Highlanders out of the end zone until near the end of the game.

The Highlanders are hamstrung offensively. They lost starting running back Will Young to a knee injury in spring practice, then lost their new starting running back and starting quarterback in fall camp, forcing them to shuffle players on that side of the football. The passing game struggled to get going, as Scott completed two passes for 31 yards.

Defensively, Coalfield was unable to put up explosive numbers against the Highlanders, but was able to do just enough to build a comfortable lead in the third quarter. The Yellow Jackets finished with 221 yards of offense, including 145 on the ground.

Scott’s defense limited the Jackets to 5 of 13 through the air for 76 yards. However, Coalfield came through big with its passing game when it mattered most. Three of Bill Hines’ five completions went for touchdowns.

Cannon Vanhook was the Highlanders’ leading rusher, with 61 yards on 15 carries. Phoenix Norris had 22 yards on four carries, including a 13-yard touchdown run.

Brady Strunk, who went all the way at quarterback for the Highlanders, had 20 yards on 15 carries.

Scott High’s defense was led by Nolan Cotton, who had nine tackles. Several other players had big games defensively, as well, including Vanhook, Norris, Skyler Smith and Luke Bowling.

The Highlanders started the game by forcing Coalfield into a 3-and-out. But Scott was unable to capitalize, punting the ball right back to the Yellow Jackets. The home team responded with a 12-play, 58-yard touchdown drive, twice converting third-and-long along the way before scoring on fourth-and-long with a 20-yard touchdown catch and run by Rommell Conlon.

Disaster struck for Scott High on the next series, when Hayden Hicks intercepted a pass and returned it to the Highlanders’ 8-yard-line to set up another score, which came on a 1-yard run by Canaan Bowling on fourth down.

Scott High got into Coalfield territory on the next possession, thanks to a 16-yard run by Strunk. But another fumble ultimately killed the drive by placing the Highlanders behind the sticks.

The Highlanders were gifted an opportunity on the ensuing possession, when Coalfield coughed up the ball and Vanhook recovered at the 14-yard-line. But the Highlanders continued to be plagued — first by a penalty and then by a fumble that set them back. Ultimately, Hugo Henry’s 35-yard field goal attempt was blocked.

Scott found itself deep in Yellow Jacket territory again late in the first half, but Coalfield’s defense bowed its back. Yet another first down false start penalty put the Highlanders behind the chains. A big play followed, but left the Highlanders just short of the sticks, inside Coalfield’s 5-yard-line. From there, the Yellow Jackets three times came up with stops at or behind he line of scrimmage to force the ball over on downs as the first half clock expired.

Although the first half had been played close to evenly, Coalfield was able to put the game away in the third quarter.

After a three-and-out by Scott to get the second half started, the Yellow Jackets marched swiftly to the end zone, with Hines finding Bowling for a 13-yard touchdown and a 21-0 lead.

Three plays later, Coalfield recovered yet another Scott High fumble, gaining possession at the Highlanders’ 33-yard-line. That set up a 20-yard touchdown from pass from Hines to Landon Gaylon, pushing the lead to 28-0.

Following a Scott High punt, the Yellow Jackets were on the move again, scoring on a 5-yard run by Landon Lowe to cap a 7-play, 50-yard drive.

Scott responded with an 11-play, 87-yard drive that was capped by a 13-yard touchdown run by Norris to get the Highlanders on the board.

Coalfield’s last possession of the game was a three-and-out.