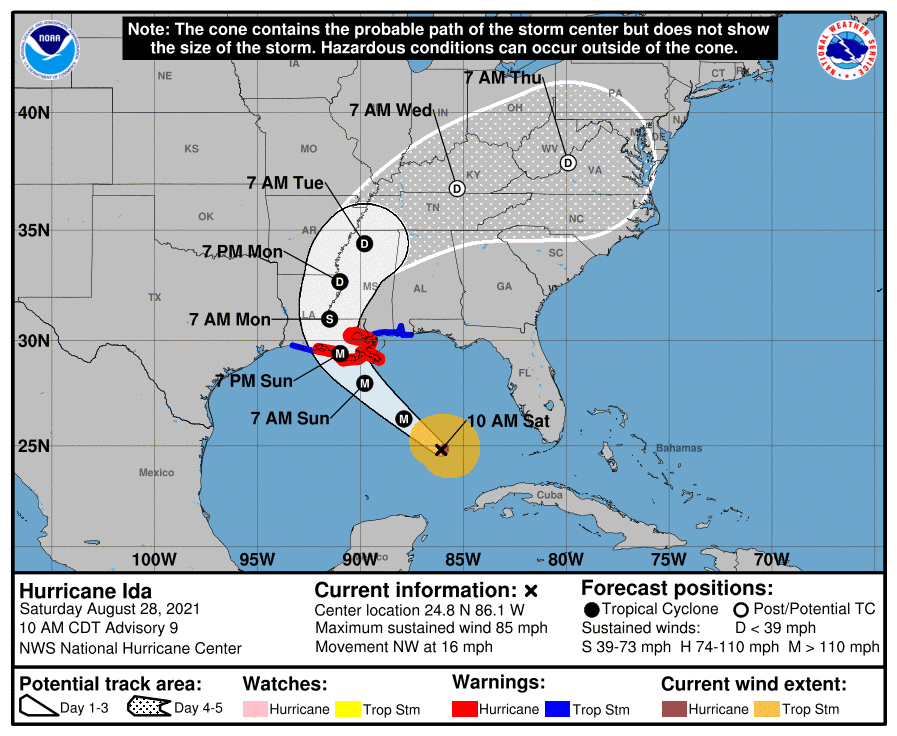 Ida is currently a category 1 hurricane with maximum sustained winds of 85 mph. She is rocketing northwest through the Gulf of Mexico at 16 mph. Now that the storm is over the open waters of the Gulf, rapid intensification is expected, and Ida is very likely to make landfall as a major hurricane. With little wind shear to contend with and bathtub-warm waters in the GOMEX, conditions are near perfect for storm development.

The forecasted track for Ida has remained amazingly consistent. She’s poised to make landfall just west of New Orleans, dumping substantial rainfall along much of the Louisiana coast. Life-threatening flooding and storm surge are likely. A Hurricane Warning is in effect for most of the Louisiana coast, and the National Weather Service is urging people in the path of the storm to rush their hurricane preparations to completion today.

Landfall will occur tomorrow evening. For now, Ida is still forecasted to make landfall as a cat3 hurricane, with winds in excess of 110 mph. But as we have discussed previously, there’s still the possibility that this storm intensifies more than is currently expected, and makes landfall as at least a cat4 hurricane. However, landfall as a cat3 is the best bet, as the storm will likely go through at least one eyewall replacement cycle as she approaches the coast. Of course, that’s merely splitting hairs. Either a cat3 or a cat4 hurricane is a very dangerous storm. (Just to underscore that point, Hurricane Katrina was only a cat3 hurricane when she made landfall in 2005. Ironically enough, Ida will make landfall on the exact same day as Katrina, exactly 16 years later.)

Obviously the biggest impacts from Ida will be for the folks along the coast. In addition to hurricane-force winds, New Orleans and the rural Louisiana coast will also deal with life-threatening storm surge of 9 ft. or greater, which could overtop levees and lead to significant flooding.

A little further inland, significant flooding is likely to occur from heavy rainfall both Sunday and Monday.

Obviously for those of us here in Tennessee, the biggest question is what will Ida do once she has become a post-tropical depression by the middle of next week. And the answer is that she’s likely to dump quite a bit of rain.

The center of the storm’s remnants will likely track very close to right over our heads here on the northern plateau by early in the day on Wednesday. In general, the track is shifting further north. That’s due to a couple of things: one, Ida will make landfall a bit further west than previously expected. Two, an approaching frontal boundary won’t have as much of an impact as currently thought. We mentioned in an earlier update that the GFS model was keeping Ida’s remnants to our south. That’s no longer the case.

The good news for us here on the plateau is that the NWS’s Weather Prediction Center is shifting the axis of heavy rainfall from Ida further west, keeping the greatest rains west of the plateau. That’s in line with what the models are showing, as it looks like East Tennessee will largely escape the heaviest rains associated with this system because the heaviest rains are relegated to close to the center of circulation with this system.

The NWS’s Morristown weather forecast office is currently forecasting a 60% chance of rain beginning Tuesday and continuing through Wednesday. Rain chances will begin to decrease later in the week.

The bottom line is that this is not going to be a high-impact storm for us. We should see an inch or two of rain beginning Tuesday and continuing into Wednesday, but flooding concerns are minimal, and severe weather chances are low — though it should be noted that NWS-Morristown is highlighting potential for tornadoes to occur with this system. The Storm Prediction Center, however, is not outlining areas for elevated risk of severe weather at this time and, frankly, the severe weather risk appears really low unless the track of the storm’s remnants change.

The good news is that Ida should deliver cooler temperatures for a few days. Highs in the mid 70s are likely Tuesday and Wednesday; it’ll feel like a taste of fall. We’ll bounce back later in the week, but highs are likely still only in the low 80s, which will be several degrees cooler than our temperatures this week.

The bottom line: Hurricane Ida will make landfall along the Louisiana coast as a major hurricane late in the day tomorrow, resulting in hurricane-force winds in excess of 110 mph, life-threatening storm surge along the coast and significant flooding inland. From there, the cyclone will weaken to a tropical storm and then a tropical depression before tracking just to our west and north as a post-tropical depression on Wednesday. The primary impact for our area is increased rain chances Tuesday and Wednesday. For now, it looks like a couple of inches of rain may be all that we see from this system. However, if the storm shifts further east, or if the heaviest rain bands wind up being displaced further from the center of circulation than what is currently expected, that forecast could change. Cooler temperatures are expected from Tuesday through the rest of the week.