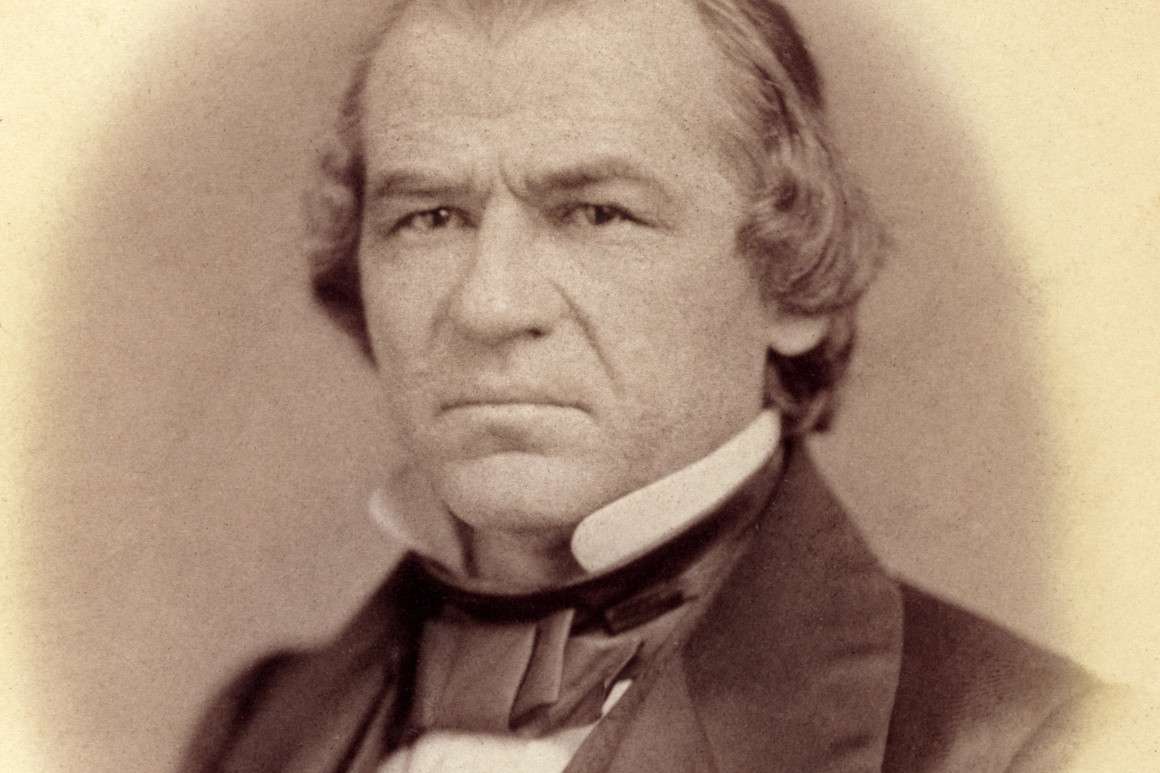 Few of the 46 presidents of the United States have ever known where Scott County, Tennessee is located. But one of them knew: the 17th president, Andrew Johnson. And, if Johnson was telling the truth, so did his predecessor, Abraham Lincoln — specifically because Johnson bragged about Scott County to Lincoln.

In fact, it was in Scott County in 1872 that Johnson delivered one of his final political speeches.

Johnson’s political legacy is complicated. He was a Democrat, and a slave-owner. But he was also fiercely opposed to secession, and toured Tennessee to oppose separation from the Union before fleeing for his life through the Cumberland Gap. It was during that tour that he spoke on the steps of the Scott County Courthouse in Huntsville in 1861.

However opposed to secession he may have been — and his role as the most prominent Southern Unionist was enough to make him an ally of Lincoln, and he eventually became Lincoln’s vice president — Johnson angered Republicans by pushing pro-Southern and anti-black measures as president … so much so that he was impeached by the House of Representatives in 1869 and acquitted by only a single vote in the Senate.

Many historians remember Johnson as one of the worst — if not the worst — presidents in American history. But history is seldom simple, and Johnson is proof enough of that.

Born into poverty in a two-room shack in Raleigh, N.C., Johnson did not obtain a formal education. In fact, he’s the only American president who never went to school. As a child, he was legally bound as an apprentice to a tailor’s shop. He ran away, and eventually moved to Tennessee.

Johnson fell in love with Greeneville, and established a successful tailoring business there as a teenager. He married at the age of 18. Ironically enough, the marriage ceremony — to the daughter of a local shoemaker — was presided over by Justice of the Peace Mordecai Lincoln, the first cousin of Thomas Lincoln, whose son would later become president.

Eliza Johnson taught her husband math skills and helped him improve his writing. As his tailoring business grew, Johnson became wealthy. In 1843, he purchased his first slave, a 14-year-old girl. He later purchased a 13-year-old slave who would later accompany him to the White House. Johnson ultimately owned as many as 14 slaves, though he was said to be compassionate toward them and freed them in 1863, after which they remained with him as paid servants.

Johnson first served as an alderman and later mayor in Greeneville, before being elected to Congress in 1843. He served five terms in the House of Representatives before returning to Tennessee to be elected governor. Following his stint as governor, Johnson was elected to the U.S. Senate.

As the secession crisis dawned in 1859, Johnson gave a speech in the Senate, criticizing Northern abolitionists by saying their efforts to outlaw slavery would endanger the Union. He also said that the “all men are created equal” line from the Declaration of Independence did not apply to African-Americans.

Nevertheless, Johnson was fiercely committed to the Union. After Lincoln was elected in 1860 and secession talks began in earnest, he gave a speech on the floor of the Senate, declaring, “I will not give up this government … No; I intend to stand by it … and I invite every man who is a patriot to rally around the altar of our common country and swear by our God and all that is sacred and holy that the Constitution shall be saved, and the Union preserved.”

As Southern senators announced that they would resign from the Senate, Johnson reminded a Mississippi senator named Jefferson Davis that Democrats would continue to control the Senate if they all stayed, which would counteract any effort by Republicans to abolish slavery. But Davis rejected Johnson’s plea and went on to be elected president of the Confederacy.

When Gov. Isham Harris called for a secession referendum in Tennessee, Johnson left Washington and rode back to the Volunteer State to campaign against Harris’s measure. That’s what brought him to Huntsville in 1861. We don’t have a record of what was said on the front steps of the courthouse that June day, but it was said to be a fiery speech, and Scott Countians responded by voting against secession by the largest margin of any county in Tennessee: 541 to 19.

Nevertheless, Tennessee voted to secede. Scott County would secede from Tennessee in protest, and East Tennessee was largely pro-Union, but Johnson believed that he would be killed if he remained in Tennessee. So he escaped through the Cumberland Gap, leaving his wife and family back home in Greeneville. In fact, he was shot at as he made his escape through the mountainous passageway.

Back in Washington, Johnson became the only U.S. Senator from a Confederate state who did not resign his seat. As such, he earned favor with Lincoln. And when Union forces took control of much of Tennessee in 1862, Lincoln named him the state’s military governor.

As military governor, Johnson shut down all newspapers that were owned by Confederate sympathizers in an effort to eradicate Rebel influence from the state. But he remained pro-slavery. When Lincoln issued the Emancipation Proclamation in January 1863, Tennessee was exempted — at Johnson’s request.

But it wasn’t long before Johnson had changed his mind, and he proclaimed that all slaves in Tennessee should be free, saying, “If the institution of slavery seeks to overthrow (the government), then the government has a clear right to destroy it.” He recruited 20,000 black soldiers to join the Union army and fight against the Confederacy. One of his final acts as military governor was to certify the results of Tennessee’s 1865 constitutional amendment referendum, which abolished slavery in the Volunteer State.

Johnson wound up on the presidential ticket with Lincoln in 1864, and was drunk when he was sworn into office as vice president in March 1865. Lincoln responded by saying, “I have known Andy Johnson for many years; he made a bad slip the other day, but you need not be scared; Andy ain’t a drunkard.”

On April 14, 1865, Johnson met with Lincoln for the first time since the inauguration. He urged Lincoln to not be too lenient with traitors of the Confederacy. That night, Lincoln was shot and killed by John Wilkes Booth at the Ford Theater. The shooting was part of a greater plan to assassinate Lincoln, Johnson and Secretary of State William Seward. But Johnson’s would-be assassin chickened out, and drank himself into an intoxicated state rather than carry through with the plan.

As president, Johnson’s troubled legacy continued. He opposed the 14th Amendment to the Constitution, and opposed former slaves being granted the right to vote. On the other hand, Johnson was anxious to see Davis — the former Confederate president — tried for treason.

Despite his history as a slave-owner and his general opposition to rights being extended to freedmen as president, Johnson appeared to have a change of heart after leaving the White House.

In 1872, as he campaigned for an at-large congressional seat in Tennessee, Johnson visited Huntsville again. Here, he gave a speech in which he talked about loyalty and patriotism and how Scott County had sided with the Union during the war. According to historian H. Clay Smith, Johnson said that he had spoken with Lincoln about Scott Countians during the war, and how the people here were loyal to the Union. Then he read from a poster in his hand, “I will keep at all times a good stock of negroes all from selected stock consisting of good field hands, blacksmiths, drivers of stock and generally any type of help wanted. Also a good grade of trusted mammies and young and old season cooks, seamstresses and granny women.” Having read those words, Johnson is said to have turned to a former slave in the audience and said, “Mr. Hancock, you will never know the dread of such notices again.”

Johnson lost that congressional election. Ironically enough, he was defeated by Horace Maynard — the politician who had accompanied him to Scott County for the anti-secession speech in 1861.

Smith wrote that Johnson’s 1872 address in Huntsville was the final speech of his career. That’s almost certainly incorrect. Johnson successfully campaigned for a Senate seat in 1875, winning on a 54th ballot. On March 22, 1875, Johnson gave a short speech on the Senate floor to criticize President Ulysses S. Grant for using federal troops in support of Louisiana’s Reconstruction government. He said, “How far off is military despotism?” He concluded his speech by saying, “May God bless this people and God save the Constitution.”

Four months later, Johnson died of a stroke near Elizabethton, Tenn. He was buried with a copy of the Constitution beneath his head.

Forgotten Times is presented by United Cumberland Bank on the fourth week of each month as part of the Independent Herald’s Back Page Features series. Story ideas? Email newsroom@ihoneida.com!