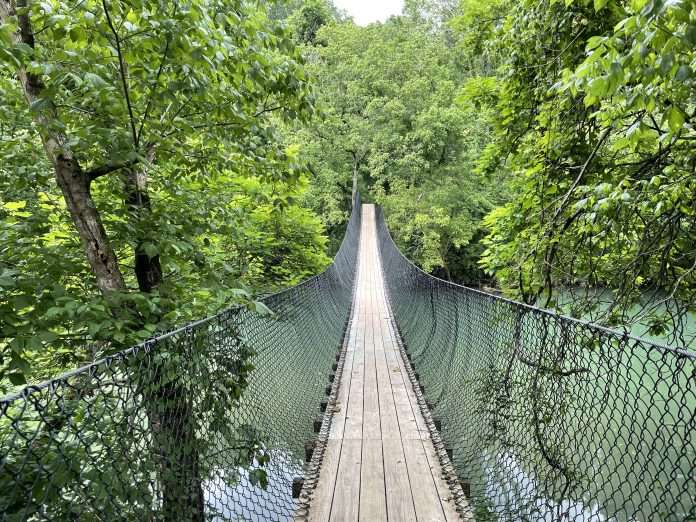 None of the trails featured as part of the Twenty Week Hiking Challenge have been as easy as this week’s hike at Sgt. Alvin C. York State Historic Park will be.

That will be a relief for hikers who are still recovering from last week’s hike through the forgotten No Business community and up Maude’s Crack, but that’s not why we chose the York hike for this week.

The York hike is timed to coincide with the 4th of July holiday. Truthfully, any time is a great time to visit the Alvin C. York State Historic Park in Pall Mall, but there’s no better time to do so than during this most patriotic time of year.

The state park pays homage to the life and service of York, who became one of America’s most highly-decorated World War I soldiers after killing at least 25 German troops and capturing well over 100 more as he attacked a machine gun site in France.

Unlike some state parks, which include many hiking trails, the York state park includes just one: A half-mile trek that connects York’s home and farm with his church and burial site.

Out and back, the York trail is just 1.2 miles, featuring only 49 ft. of elevation gain. That makes for a super easy hike that is suitable for all ages. In fact, most of those who hike the York trail are elderly visitors to the state park. So this hike is a great opportunity for those who aren’t participating in the hiking challenge, or who started but gave up, to jump in and complete a great stroll through nature.

From York’s two-story home on U.S. Hwy. 127, the hiking trail begins through the fields. Just after passing York’s barn and stone silos, you’ll be able to see the Yellow Doors, the cliff line along the western escarpment of the Cumberland Plateau where York went to pray after being drafted in 1918.

The trail continues through the field, then enters the forest and drops to the edge of the Wolf River. The river’s waters are sluggish, slowed by the dam at York’s grist mill nearby, and it’s not uncommon to see large bass lazily swimming just beneath the river’s surface, even in the heat of the day.

Songbirds are abundant along the trail — again, even in the heat of a mid-summer’s day — and provide a chorus for hikers to walk to.

After meandering along the river’s bank for a short distance, the trail crosses the river via a swinging bridge, then climbs a short flight of stairs to the Wolf River Cemetery and the Methodist church nearby.

Hikers will want to take some time to explore the cemetery before beginning their hike back to York’s home. Not only are Sgt. York and his wife, Miss Gracie, buried in the cemetery, but there are more than 400 other graves, as well. The oldest dates back to 1828. Coonrod Pile, Sgt. York’s great-grandfather and one of the first settlers of the Valley of the Three Forks of the Wolf River, is buried in the cemetery, and his grave is one of several unique above-ground graves that are encased with fieldstone. A large number of Yorks and Piles are buried in the massive cemetery.

Back at the Sgt. York State Historic Park, there are numerous ways to make the hike better. Don’t leave without exploring the park and stopping at the general store next door for a refreshing scoop of ice cream or a hot lunch.

Getting There: Take S.R. 297 west from Oneida, through the Big South Fork National River & Recreation Area. At the highway’s terminus at S.R. 154, turn left and take S.R. 154 south into Jamestown. At its intersection with U.S. Hwy. 127, turn north, and follow Hwy. 127 into the Valley of the Three Forks of the Wolf River to Pall Mall. The village of Pall Mall is located nine miles north of Jamestown. The trailhead is located at York’s white, two-story home, just before the Wolf River Bridge.

Fun Fact: Sgt. York’s 400-acre farm was purchased for him and his new wife, Gracie, by a group of businessmen, who were acting out of gratitude for York’s heroism in World War I. However, it was supposed to be fully equipped, and wasn’t, requiring York to borrow money to stock it. When the Great Depression began, York found himself broke and was also saddled with taking on the payments for the farm after the Rotary Club also went broke. (See related story, Page A16.) Coonrod Pile once owned 1,000 acres in the Valley of the Three Forks of the Wolf River.

Be Careful For: There are no real hazards along the Alvin C. York Trail. However, the approach to the swinging bridge over the Wolf River are steep on either side, and can be slippery after a recent rainfall.

Look For: A short distance through the field from the start of the York hike, you’ll find trenches that were built to depict life in World War I for entrenched soldiers who were being bombarded by enemy mortars.

Make it Better: Be sure to explore all of the York park, including his home, his grist mill, the York Bible School and the visitor center. Guided tours are available for a fee. The Wolf River, just below the grist mill, is a great spot to wade into the water and cool off from the summer heat. And, before you leave, be sure to stop by the York General Store for some of the best hand-dipped ice cream available anywhere.

The TN Dept. of Health has reported four new covid-related deaths in Scott County in the past few days, bringing the total number to...
Read more