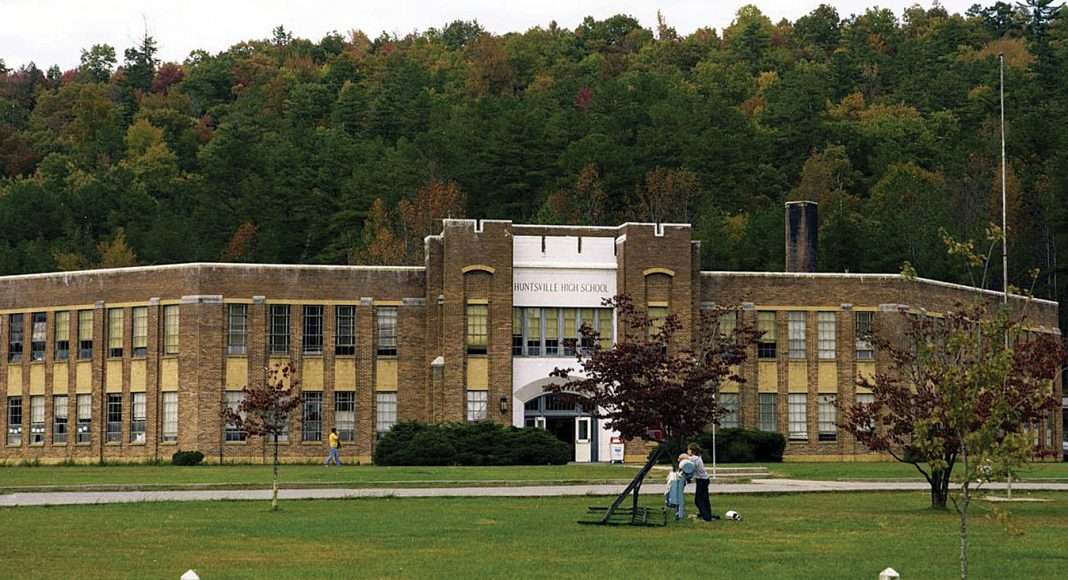 Forgotten Times: The rise and fall of Huntsville High School

“One of the most unique buildings ever to grace Scott County.”

The two-story brick structure, situated along S.R. 63 where the current elementary-middle school complex currently stands, served as Huntsville’s high school for nearly 40 years, and as a middle school for another 20 years after that. And the original cost of construction, believe it or not, was less than $75,000.

That was the stipulation of a bill passed by the Tennessee General Assembly in February 1931, and signed into law by Gov. Henry Hollis Horton: that a new elementary and high school be built in Huntsville, with a cost not to exceed $75,000. Construction began, and by the start of the 1932-1933 school year, the building was ready for use.

Huntsville High School predated the Scott County School System, but was eventually incorporated into the school system. In 1929, a wood frame gymnasium was built adjacent to the school, but the original school building had pretty much served out its usefulness by that point. Two years later, the legislature approved construction of a new school, saying that the existing building was “entirely inadequate to care for the high school as it should be taken care of.”

A committee was formed to oversee planning for the new school. Among its members were Howard H. Baker Sr., who would eventually be elected to Congress. Baker was at that time a member of the Scott County Board of Education, and had previously served a stint in the state legislature. He was also the publisher of the weekly newspaper in Huntsville.

Other members of the committee included U.E. Jeffers as chairman, O. Earl Byrd as secretary, William York and E.G. Foster.

Clem H. Meyer was the architect who oversaw design of the school building, and Cook & Elliot was the firm hired to construct the building.

The late Bert Walker described the new building like this: “A strong, sturdy, solid two-story memorial to the educational commitment of this county … the fort-like building is constructed like a large wing with a big auditorium behind the wing which seats approximately 350 people. The building has a flat roof and the interior is of a plaster construction.”

The mammoth high school was an immediate source of pride for the people of Huntsville. Upon its completion in 1932, the Scott County News wrote that the new school was “one of the best buildings of its kind in any town the size of Huntsville in the entire state and is not surpassed in the large cities for beauty, modern construction and arrangement.”

While the interior of Huntsville High School changed through the years, its outward appearance remained largely the same, except for two wings that were added in 1949 to serve as a cafeteria, gymnasium and new classrooms.

The new cafeteria replaced a stone structure that had been built behind the school in the early 1940s. After the cafeteria was moved into the main building, the additional building out back was used by the school’s vocational agriculture department for several years. Another building was added in the 1960s to house the school’s trades and industries department.

Inside the school, the bare concrete floors were eventually covered with carpet and tile, the brick walls in the hallways were painted white, a drop ceiling was installed in the auditorium for acoustical purposes, and the original metal lockers were replaced by wooden lockers. The hot water radiation heating system originally put into place in the 1930s was used to heat the building until its final days, although the boiler in the school’s basement was changed from a coal-fired unit to natural gas.

In 1971, Scott High School — the county’s new comprehensive high school — was completed to consolidate high school students from Huntsville, Norma and Robbins. Huntsville High School’s days were over, after 63 years — including 39 years in the “new” building. The last principal at the high school was Arvis Blakley.

The massive building that had served students at Huntsville through the years continued to be used as a middle school until the 1990s, when it was finally torn down and replaced.

Walker, writing for the FNB Chronicle in 1991, described the case for replacing the structure: “We are told by various sources, state educators, local educators, school board, fire marshals, architects, et al, that this building is not student efficient, energy efficient, not accessible to handicapped people and that it would radically alter the historical aspects of this building to make it fit for today’s ‘requirements’ and would cost as much or more than a new building, with today’s standards used.”

Walker was among those who advocated for saving the old building, which had been placed on the National Register of Historic Places in 1987. But the building was ultimately demolished due to cost concerns and the need for a place to build a new middle school, and one of the finest chapters in Scott County’s history of public education was brought to an end.

On Thursday, April 8, 2021, a tornado touched down in Norma and Straight Fork,...
Read more
Features

The Walker graves: Final resting place for one of Brimstone’s early leading couples

BRIMSTONE — On the end of a small ridge overlooking Indian Fork Creek is...
Read more
Features

Editor's Note: Our Conversations With Pastors series returns with a sit-down with First Baptist...
Read more

In what was scheduled to be the first of two meetings between the two schools this week, Oneida defeated Scott High 4-2 at Jane...
Read more

A winter-like blast of cold air is headed our way for the middle of this week, bringing with it the threat for frost and...
Read more

HUNTSVILLE — Scott High started the day with dominating wins over Clinton and Harriman, and ended it with a loss to Oneida in the...
Read more